We make our communities better through leadership, partnership and service. 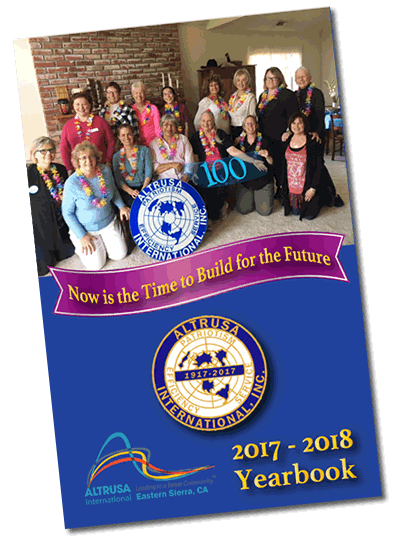 Altrusa of the Eastern Sierra is a not-for-profit service association of men and women who volunteer their energies and expertise to projects dedicated to community betterment, with a particular focus on the promotion of literacy. Altrusa of the Eastern Sierra was chartered on June 2, 1985 and is part of Altrusa International District Eleven, which encompasses Arizona, California, Hawaii, Nevada, Baja California Norte, Baja California Sur, and Sonora Mexico. The district has 25 clubs with a total membership of over 372 members. District Eleven is a subdivision of Altrusa International.

Our local club meets on the second and fourth Thursday of each month. We follow the guidelines and goals established by the District and International Boards to provide service to the communities of the Eastern Sierra. Over the past years, the Altrusa Club of the Eastern Sierra has actively supported such issues as literacy, education and vocational scholarships, as well as many other community projects.

Vision Statement
To serve the community as volunteers making a difference.
Mission Statement
Altrusa International of the Eastern Sierra is a professional organization focusing on service and literacy projects for the communities within Inyo & Mono Counties as well as international service while fostering and building leaders & volunteers among its membership.

Altrusa Benediction
May we go forth with high ideals
To greet our fellow man,
Be true to all Altrusa aims
Until we meet again.

Altrusa Collect
Our Heavenly Father,
Surrounded by blessing,
May we learn to bless;
Reaping the fruits of patriotism,
May we love our country more;
Members of a worldwide community
May we cherish our neighbors everywhere;
Grateful to Thee,
May we show our gratitude
By Efficiency and Service.

Altruism [( al -trooh-iz-uhm)] -noun
Unselfish concern for the welfare of others; the principle of living and acting for the good of others; selflessness.

History
Altrusa International’s history of community service began on April 11, 1917 when leading business and professional women gathered to exchange ideas. It was here that women who lacked even the right to vote saw that they could be mentors to young women who were going to college and encountering many more career choices. The main objective of Altrusa was to be of service to young women entering business and professional fields.

Altrusa has come a long way in 85 years. Altrusa Clubs now accepts men and boast more than 13,000 members in 15 Districts. Clubs-At-Large in other countries have over 450 clubs formed in nearly 20 countries.

Business Meetings:  ALL in-person meetings are canceled – get in touch if you want to meet with us online!

When: 2nd Thursday of Every Month @ 6PM

When: 4th Thursday of every month @ Noon

Any cookies that may not be particularly necessary for the website to function and is used specifically to collect user personal data via analytics, ads, other embedded contents are termed as non-necessary cookies. It is mandatory to procure user consent prior to running these cookies on your website.